Stop At: Blue Lagoon, Nordurljosavegur 9, Grindavik 240 Iceland
The first stop will bring you to the Blue Lagoon. The warm azure water is renowned for its healing properties, as is the natural silica mud you can use as a revitalising face mask. The Blue Lagoon invigorates both your body and mind, preparing you for your road trip adventure.
Duration: 2 hours

Stop At: Hallgrimskirkja, Hallgrimstorgi 1, Reykjavik 101 Iceland
Inspired by Iceland's volcanic rock formations, Hallgrímskirkja can be seen from almost anywhere in the city! Take the elevator to the top for Reykjavík's best city views.
Duration: 15 minutes

Stop At: Sun Voyager, Saebraut 101, Reykjavik 105 Iceland
Sun Voyager (Icelandic: Sólfar) is a sculpture by Jón Gunnar Árnason, located next to the Sæbraut road in Reykjavík, Iceland. Sun Voyager is described as a dreamboat, or an ode to the sun. The artist intended it to convey the promise of undiscovered territory, a dream of hope, progress and freedom.
Duration: 10 minutes

Stop At: Lake Tjornin, Reykjavik Iceland
Tjörnin is a prominent small lake in central Reykjavík, the capital of Iceland. Most visitors to the city pass along its shore, as it is situated in the city centre next to the Reykjavik City Hall and several museums.
Duration: 10 minutes

Stop At: Perlan, Varmahlid 1 Oskjuhlid, Reykjavik 105 Iceland
Home to the Wonders of Iceland exhibition and an impressive artificial geyser, Perlan is a stunning glass dome crowned by one of the city‘s best restaurants.
Duration: 30 minutes

No meals included on this day.
Accommodation included: Overnight stay in 2-star hotel/guesthouse in Reykjavik

The first stop is Þingvellir National Park. Here, you can walk along the rift valley of the Mid-Atlantic Ridge, all the while exploring an area which plays a huge role in Iceland's heritage; parliament was founded here in 930 AD, and it is also where Iceland converted to Christianity and declared its independence from Denmark.
Duration: 30 minutes

Stop At: Geysir, Haukadalur Iceland
The geothermal valley of Haukadalur is the next stop, where you can see the geysers Strokkur and Geysir, amongst many bubbling hot springs. Strokkur puts on an unforgettable display every 10 minutes or so, erupting to heights that exceed 20 m (66 ft).
Duration: 30 minutes

Stop At: Gullfoss, White River, Blaskogabyggd 801 Iceland
Just a few kilometres away is Iceland's most popular attraction, the mighty waterfall of Gullfoss. A pathway takes you to the water's edge, where you can get a real sense of the incredible power of these enormous falls. From Gullfoss, those with a good sense of adventure can jump on an optional snowmobiling tour on Langjökull glacier.
Duration: 30 minutes

Stop At: Kerid Crater, Route 35, Selfoss Iceland
Another popular sight of the area is the volcanic crater Kerið, which is well worth a visit before continuing to the South Coast. The rocks of this crater are coloured rusty red and fiery orange, and the water that permanently sits within its basin is an incredible, vivid blue. The colour contrast, especially when you add green-growing moss, is simply stunning.
Duration: 30 minutes

No meals included on this day.
Accommodation included: Overnight stay in 2-star hotel/guesthouse in Reykjavik.

Stop At: Geothermal area krysuvik, Reykjavik Capital Area Harnarfjordur, Reykjavik 220 Iceland
This place brings the idea of a hot spring to a totally different level. On a landscape that looks more like moon than earth, see the boiling mud pools and soil of every shade that you can imagine.
Duration: 15 minutes

Stop At: Brimketill, Grindavik Iceland
After passing by the town of Grindavik, you will arrive at the Brimketill lava rock pool. Be blown away (literally) by the Atlantic ocean winds and witness the force of nature.
Duration: 15 minutes 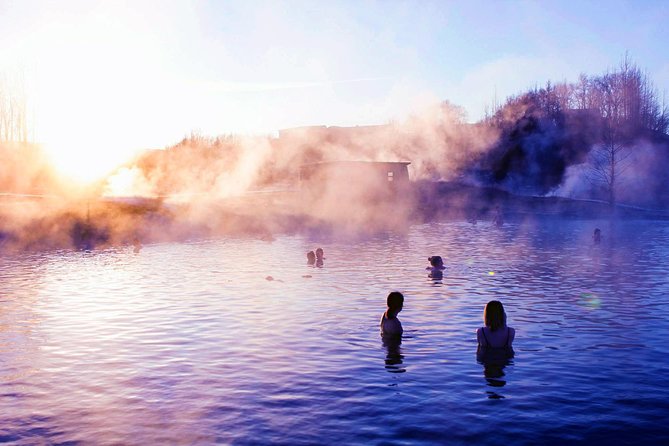 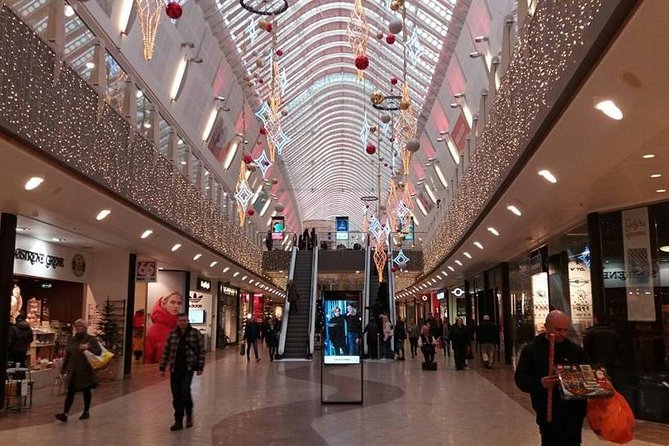 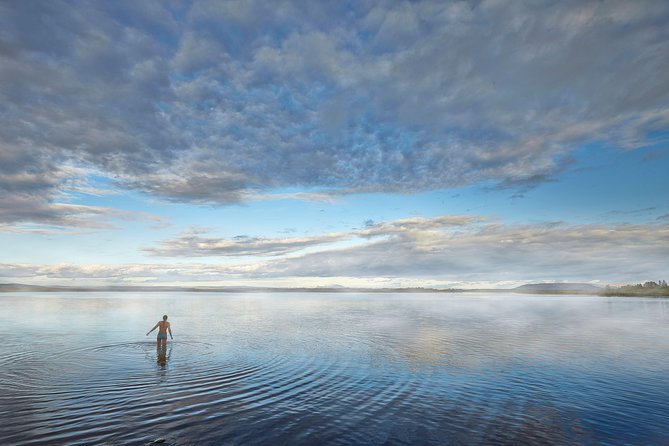 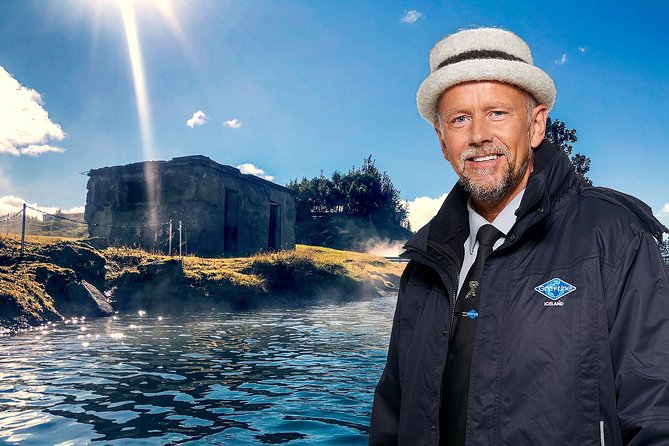 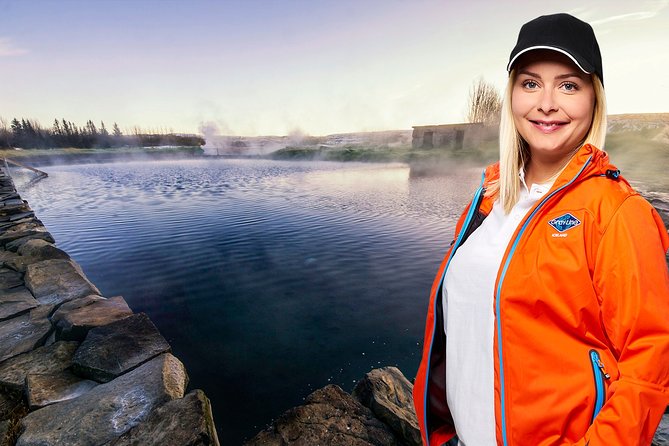 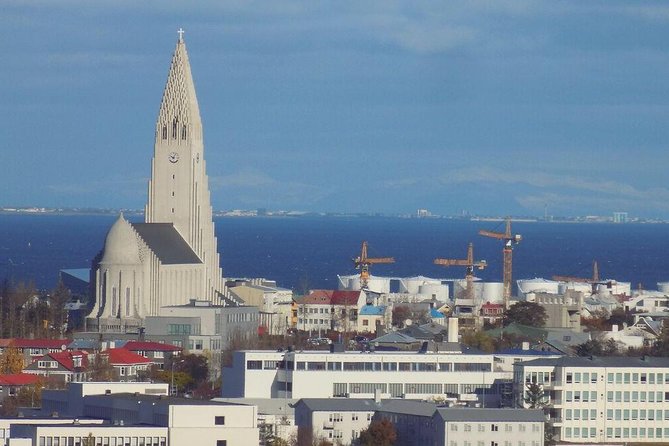 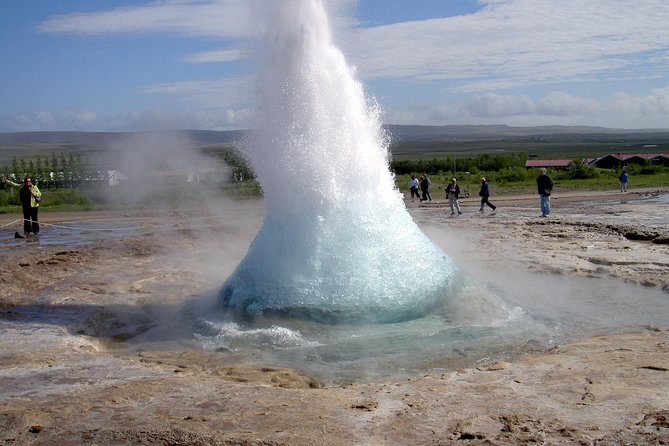 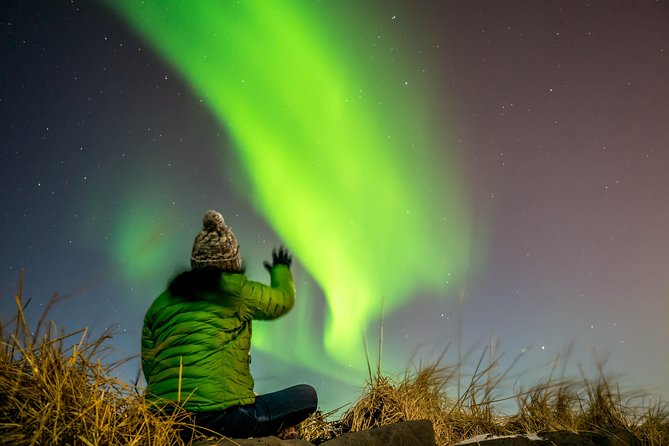