Stop At: San Pietro in Vincoli

Begin your journey near the Colosseum and take a pleasant walk through the surrounding neighborhood. In a delightful little piazza off Via Cavour, you will find the church of San Pietro in Vincoli (St. Peter in Chains). The church houses an important relic, the two sets of chains that bound St. Peter when he was imprisoned in Jerusalem and Rome. The highlight of this church is undoubtedly Michelangelo’s statue of Moses, an unfinished masterpiece by the Renaissance genius that was originally intended to be part of the tomb of Pope Julius II. The original plans included an enormous funeral monument with 47 statues, but it was never completed due to Michelangelo's other commissions.

Leaving San Pietro in Vincoli, continue to see the ruins of the Ludus Magnus, an ancient gladiator training school located on the northeast side of the Colosseum. The visit includes the entrance into the most important gladiator gym, the Ludus Magnus, built by the emperor Domitian at the end of the 1st century. A.D. The building, entirely in brick, consisted of a rectangular building, probably on three floors, with a large porticoed courtyard in the center. Around the courtyard there were a series of rectangular rooms destined to house the gladiators. The characterizing element is constituted by the presence, in the courtyard of the building, of a miniature amphitheater, intended for training gladiators. After about half an hour, we will proceed towards San Clemente.

Stop At: Basilica of San Clemente

Your last stop is the Basilica of San Clemente al Laterano along Via San Giovanni. This 12th-century basilica is a great example of architectural chronology: the structure is a three-level building complex, with each level corresponding to a major era of Roman history. Remains under the present basilica suggest that the foundation was part of a republican-era villa. In the 4th century, this was converted into a Christian church dedicated to Pope St. Clemet, the third Pope after St. Peter. The present Medieval basilica was built in 1100.

Tour in the City agency is located on top of the Colosseum Metro Station. You have to cross the little pedestrian bridge facing the Colosseum, the tour agency is 100 meters (about 300 ft), straight ahead from there. 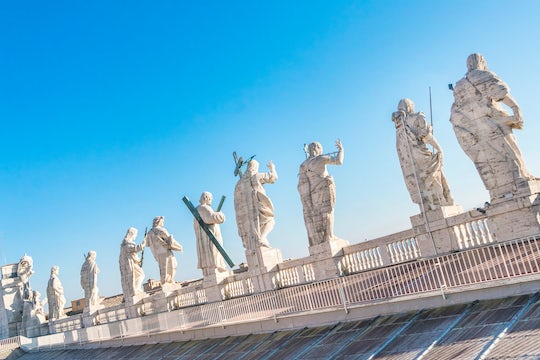